So recently I was talking to a friend of mine who recently started getting into crypto mining. I considered doing this a long time ago when bitcoin was up and coming, however by the time I was looking at mining Bitcoin it was already past the point where you could be profitable with normal GPUs. So when I heard he was doing this I thought it was a waste of time at first, but I wanted to do some more research cause he is a smart guy and wouldn’t do it unless it had a decent ROI. So I started asking questions.

My first question was what are you mining I thought it was impossible to make a profit mining Bitcoin. He wasn’t mining Bitcoin he was mining a newer currency called Ethereum. So then I started doing some research into what it takes to mine Ethereum. First thing I found out is that it is impossible to mine Ethereum with the ASIC miners that you have to use to be profitable with Bitcoin. This means the little guys actually have a chance to be profitable. So most people use 1 of 4 GPUs available in the market right now based off of their processing power to power usage ratio. Those four are all AMD GPUs, the RX 470, the RX 480, the RX 570 and the RX 580. The 400 series are actually better cause they can operate at a lower power usage.

To figure out how profitable you will be mining ethereum you simply need to calculate your processing power, MH/s (MegaHashes per Second) and your power usage, watts. So I figured out if I could find 6 of the GPU’s listed above and get them to run around 25 MH/s each at around 120 watts per card, at that time I would profit around $500 USD per month. I used an online calculator to come up with this number.

So then I started to figure out what my costs would be to get started. My shopping list included: motherboard, cpu, memory, ssd, power supply, PCI Express Risers, and of course 6 GPUs. All in I would need to spend around $2000 to get a solid 6 GPU rig running. So basically I would need to run it for 4 months to pay off the equipment and then anything after that would be straight profit, not bad.

So I did more research to figure the best option for each of these pieces of hardware. The important parts are the power supply, the motherboard, the risers and the GPUs. I read up on what people recommended and talked to my friend and started to order parts. Little did I know that crypto mining has caused those AMD GPUs to become all but impossible to find in the market. I looked for a couple days and couldn’t find a single one that was available. Finally I just happened to check an online store the day they added some RX 570s to their inventory. Needless to say I ordered them right away. 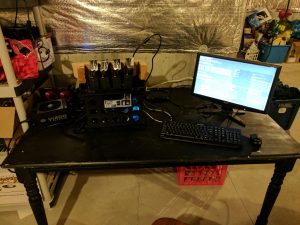 Within about a week I had all my hardware so I started to build. My friend recommended EthOS which is a linux distro setup specifically for mining. So I installed this on my SSD and got everything plugged in and running. Took awhile and some more research on how to get everything setup and I slowly added more GPUs as I got things working.

Unfortunately, once I hit 5 GPUs I started having major issues. Turns out z170 Intel based motherboards have an issue with 5 or more GPUs because of the number of PCI Express lanes they have. Finally, I bit the bullet and decided to go ahead and upgrade to a 270 series motherboard and got all 6 running without a problem. Also I did some research about modifying the Bios on the GPUs, which is quite hard to do, the research I mean, not modifying the Bios. There is a little bit of information scattered all over the internet, so you have to read about 50 different sites and get bits and pieces of information from each. Stock my RX 570s were running around 22 MH/s, by modifying the bios I got these almost up to 26.67 MH/s and using a little less electricity. So my 6 card rig runs stead at around 159 MH/s.

During these couple days Ethereum also went up quite a bit in value. So while my original calculations were around $500 of income per month by the time I got everything running it was up to around $1000 per month. My ROI time just got cut in half, so I’m quite happy.

Overall, it was fun to build the rig and get everything running. I haven’t built anything with desktop hardware since I was in college so it was fun to get my hands into some computer hardware again. I will probably continue to build more rigs if I can find more GPUs but that is the hard part, they are just about impossible to find.